Isn’t it funny how your brain can build things up and build things up until they’re a monster waiting for you to fight? It’s impossible to think that you’ll ever beat this gorgon in your head. You try and prepare but ultimately end up feeling defeated even before you’ve begun.

That’s how I felt yesterday.

I’d done my reading, and I thought I knew what to expect when I made my way into the high dependency unit. I was wrong.

Yes, he was lying there surrounded by machines and tubes. Yes, he was swollen, his arm was in a cast, and there was a Frankenstein monster-esque scar running from ear to ear. And yes, he looked small lying there (as all people seem to do when lying in hospital beds. Are they bigger than normal beds or is it the situation?)

But he was also unequivocally, undeniably, wonderfully, HIM. Although granted, a him who was dressing up as Desperate Dan for Hallowe’en. 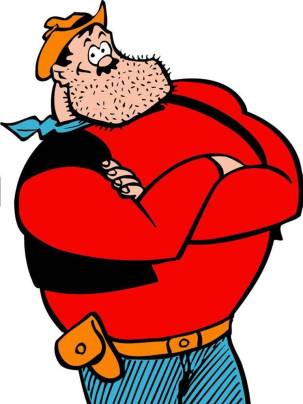 As we came into the room the machines started beeping as his heart rate and blood pressure increased, but he smiled at us with his eyes.

He looked so… well. So strong.

He took us through what the doctors had said through a combination of sign language and scribbles. We ooo-ed and ahh-ed over the criss-cross of staples in his neck. And then he showed us his new tongue. It’s incredible. It’s astounding. It’s… a tongue. A real tongue (albeit a swollen one)

And it moves! Modern medicine is a miracle. (I found out later that while they think they were able to get all the tumour out and cut out about 3/4 of the tissue, they managed to save the base of the tongue which does a lot for mobility).

I can’t begin to tell you how much of a relief it was. Granted, he was incredibly tired still, but he wasn’t the monster I had built up in my head. We didn’t stay for too long – even the smallest things like writing tired him out – but those 10 minutes did more for my mental health than countless hours on the phone with friends (with no offence meant to my friends – their support has been invaluable).

I walked out of that tiny little room and felt that a weight had lifted. I know this is just the beginning and, maybe, I caught him on a good day. But this first viewing gave me hope. Hope that in the end, no matter what he looks like or how ill he is, ultimately he is still the beautiful, funny, kind man I love.